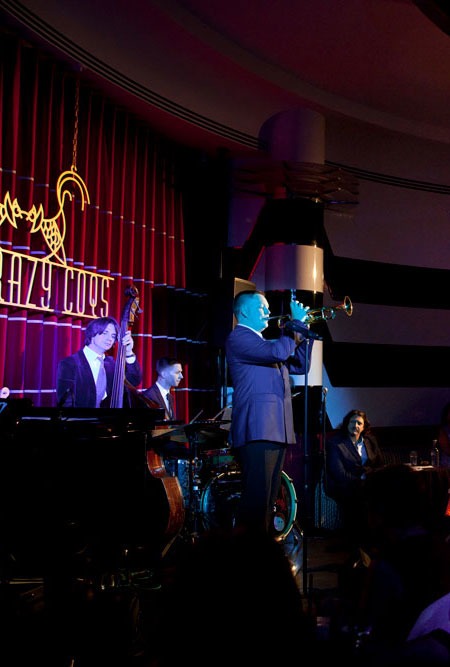 With a different band each night, playing from around 11.00pm until 12.30am, the diverse line-up champions the likes of Blues, Jazz, Swing, Cuban, Calypso, Americana, African Highlife and everything in between.

DOM AND THE IKOS

Dom Pipkin is best known for his rocking New Orleans piano styles and has been a regular performer in the city since the late 90s. Along with his band The Ikos, he delivers the infectious sounds of the Crescent City - made famous by artists such as Dr John and Fats Domino. Pipkin has worked with a host of artists over the years from Morcheeba and David Byrne to Ray Davies, Shy FX, Sophie Ellis-Bextor and Paloma Faith. His trio is made up of Roy Pfeffer of the Big Smoke Family on drums and Nick Pinion on bass, whose credits range from Laura Marling to Tom Jones.

From the Salons of pre-revolution Havana, where the sweet smell of cigars lingered and the aged rum flowed, The Sugar Kings trio present Son Montuno, Guaracha and Cha Cha Cha with a ray of Cuban sunshine. Inspired by the revival of traditional Cuban music from the amazing 'Buena Vista Social Club', it was Cuban percussionist and singer, Flavio Correa who formed the band. The three-piece is made up of himself, one of the UK's leading Salsa players, Elpidio Caicedo and classically trained Tres player and singer, Daniel Carnago.

The Tail Shakers formed in 1998 with a vision to create a Blues band with an authentic 50s sound. Their dedication to blues and their attention to detail have produced a confident, stylish and highly entertaining act. Frontman Rollo Markee started playing Blues when he was a teenager, having been inspired by his mentor, Julius Junior. Years on, he has developed a rich, passionate and authentic blues voice. His valve amplified Harp playing is full of tone, style and energy and working as a musician, actor and a dancer has made Rollo the consummate frontman.

Fraser and The Alibis

London-based four-piece, Fraser & the Alibis play the hippest in Bop, Blues and Boogaloo. Inspired by the tenor sax sounds of Dexter Gordon and the organ pioneer Jimmy Smith, the bands' original tunes are deeply entrenched in the roots of music. Fraser & the Alibis channel the intensity and feel-good effect of the swing and jive music of the dance hall era, combined with the intricacies of later jazz movements. Featuring some of the most in-demand, young improvisers on the London scene, the band has played over 400 gigs together and released their much-anticipated debut album in October 2017.

"London based band Boom La Tete, takes the essence of swing, Gypsy music, Rock'n roll and other influences to create a sound all of their own. A very high energy music, that never fails to bring people to their feet"

Influenced by SADE, Ella Fitzgerald and Pink Martini, Adriana's colourful and sensual voice has captivated audiences from both Spain and the UK.

Adriana started her music career in Spain when she was just sixteen. She soon became lead singer of the Santander Jazz Big Band. In 2012 she created her own band with Cuban, Venezuelan and flamenco musicians and together they have recorded two albums. Recently having recorded at the legendary Abbey Road Studios with some of the best musicians in London, Adriana is becoming an acclaimed performer in the London jazz and Latin music circuit. For this late night session she will perform some original Latin jazz tunes but also some from beloved current soul artists such as Jose James and Lizz Wright.

Steve Somers is a London based veteran of the Country Music scene having toured and recorded with the likes of Glen Campbell, Billie Jo Spears and Dwight Yoakum. His son Ben, was basically born in the dressing room and has gone on to tour and record with Taylor Swift, Seal, The Time-Jumpers, Dr John and many more. Energetic, masterful and fun, Steve & Ben sing and yodel their way through original and traditional Country, Western Swing and Americana. They have toured all around Europe, have released one album and are currently working on a second, all original recording.

MEZ AND THE FEZZES

Mez and the Fezzes is an all-star band featuring members of the Van Morrison Band, Jools Holland's Rhythm & Blues Orchestra and Madness. Between them, they have worked with BB King, Paul McCartney, Tom Jones, Robert Plant, Joss Stone and many, many more. Led by drummer/lead singer Mez Clough, the Fezzes play an infectious mix of rhythm & blues, rock 'n' roll, surf and swing. Keeping the dance floor rocking with classics from Chuck Berry, Fats Domino and Big Joe Turner plus cult movie themes from Quentin Tarantino.