Brasserie Zédel was once part of The Regent Palace Hotel, which was built by 'T Lyons & Co. Ltd' on Crown land, and was designed in the Beaux Arts style by Messrs. Henry Tanner, F.R.I.B.A, F.J. Wills and W.J. Ancell.

The early 20th century was the architectural heyday of grand hotels and The Regent Palace Hotel had the opulence and scale of a transatlantic liner, with a marble entrance vestibule, a Winter Garden decorated with palms and rattan chairs, and a large Rotunda Court for afternoon tea. It was run by Joe Lyons as a more democratic version of the Ritz, “to make the luxuries usually available to the very rich open to the less well-off”. Maids served tea, ran baths for guests and cleaned rooms by plugging tubes into a vacuum system built inside the walls.

In the early 1930s, Oliver Percy Bernard OBE MC (1881 – 1939), an English architect, and scenic, graphic and industrial designer, was commissioned to redesign some of the Beaux Arts interiors of The Regent Palace Hotel.
Generally recognised as one of the key figures in the creation of the art deco style, he was the son of a theatre manager and an actress, and his early career was spent as a theatre stage hand and scene painter.
Rejected for active military service, Bernard travelled to the U.S. before returning on the RMS Lusitania in 1915, surviving its sinking. He continued his theatrical work, and was also technical director of the British Pavilion at the 1925 Exposition Internationale des Arts Décoratifs et Industriels Modernes. He increasingly worked as consultant to various organisations, including J.

Lyons and Co, defining much of their later house style and designing interiors for their Oxford Street, Coventry Street, and Strand Corner Houses, as well as in 1929, a spectacular art deco entrance to the Strand Palace Hotel. 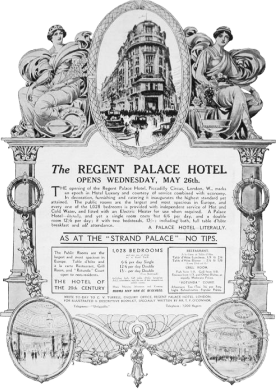 “The opening of The Regent Palace Hotel marks an epoch in Hotel Luxury and courtesy of service combined with economy.”

The interiors Bernard designed in the basement of The Regent Palace Hotel were quite astonishing and were described by Building magazine in May 1935 as “just a trifle dissipated and naughty, but not sufficiently so to be vulgar”. The “incredibly mannered” ‘Chez Cup Bar’ under the entrance rotunda, was created in 1934 out of the former billiard room, and is now the Crazy Coqs Cabaret & Bar, which has been immaculately recreated from the original architectural drawings. The hallway of tobacco-coloured travertine is retained in today’s foyer, and most impressive of all is Dick’s Bar (now Bar Américain), an extraordinary survival with its broad, horizontal stripes of stained birch veneers and jazz age columns.

After the Second World War, the hotel fell on hard times and it gradually declined in reputation until, in 2004, the Crown Estate decided to redevelop the building as part of its long-term strategy to upgrade Regent Street. Initial proposals caused concern amongst various conservation societies, worried about the potential loss of these historic interiors.

Dixon Jones were selected as architects by the Crown Estate, precisely because of their expertise in the adaptation of historic buildings, and they worked with Donald Insall Associates to restore the building’s significant 1930s art deco bars and restaurants.

According to Architecture Today Magazine, the interiors of Brasserie Zédel are “probably the best and most authentic series of 1930s interiors in this country”. 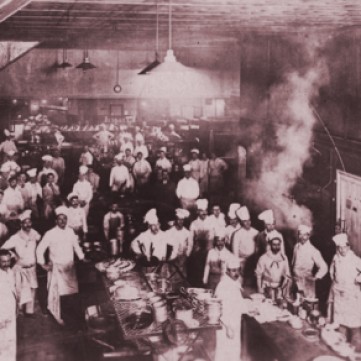 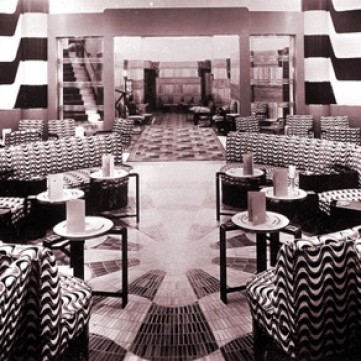