"Beautiful sensuous Purl. The vision of loveliness that is… elegant, throaty tones reminiscent of no less than Julie London. Purl is a sultry nightclub star with a show that combines intimate stories, humor and delicious song styling." LA Weekly

"What a jewel…she has an impressive range, perfect intonation and awesome phrasing."  NY Observer

MIDNIGHT CARAVAN is a salute to the great women singing stars of the 1940s and '50s - from Ella Fitzgerald to Judy Garland to Rosemary Clooney - as they reigned over the swanky, sexy supper clubs of their day. From sultry ballads to hot Latin jazz arrangements of Broadway tunes, Linda Purl, in her UK debut, features classic standards like My Romance, Shall We Dance and Caravan, and conjures a night time world where the surroundings are posh, the drinks keep flowing, and nobody goes to bed before three.

Born in Connecticut and brought up in Japan, Linda Purl has appeared repeatedly on many top TV shows: on Reckless and True Blood, The Office as Helene Beasley and the Golden Globe Award winning series Homeland, as Elizabeth Gaines. She has starred in over 40 made-for-TV movies and is especially known for her series roles as Charlene Matlock on Matlock and Ashley Pfister, Fonzie's fiancée, on Happy Days. She appeared on Broadway in Tony nominated The Adventures of Tom Sawyer and Getting and Spending and Off-Broadway in The Baby Dance and Hallelujah, Hallelujah! Purl currently tours with her solo concert Midnight Caravan - Celebrating the Great Ladies of the Glamorous Nightclub Era. She also tours with Lee Lessack in tributes to both Berlin and Mercer as well as with Gregory Harrison in A Night to Remember. 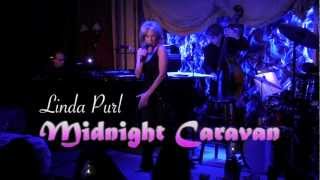 CHRIS INGHAM CELEBRATES THE ALL TIME...