"Etheridge's Saturday solo concert managed to be wonderfully personal and mind-bogglingly varied, ranging from meditative blues to joyful Cameroonian makossa, from electronically created guitar orchestration to acoustic swing and from the intricacies of Sonny Rollins's bop era doxy to the simple, soulful pleasures of Carol King and Richard Thompson, all linked by equally off the cuff reminiscences and priceless observations." Rob Adams, The Hub Edinburgh

John Etheridge rightly enjoys a glowing reputation throughout the jazz world and beyond, and has been described by Pat Metheny as "one of the best guitarists in the world", but take away the famous names from Stephane Grappelli to Nigel Kennedy, turn off Soft Machine, and John's solo concerts show a glorious guitarist who's inspired by the trinity of Django Reinhardt, Wes Montgomery and Hank Marvin.

Few of his peers handle an electric instrument with such delicacy. And whilst Etheridge combines a jazzman's sophistication with a folksy sense of drama, his penchant for simple, unaffected melodic lines makes him ideal company in a venue as intimate as The Crazy Coqs, where he plays for three nights as part of the EFG LONDON JAZZ FESTIVAL. 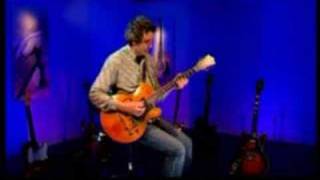