"A handsome young singer and pianist with a genuine star quality." The Times

"Eric Yves Garcia belongs to the school of jazz-leaning connoisseurs of the American Songbook epitomized by the irreplaceable Bobby Short... his tales of absurd encounters with fans are funny, self-deflating reflections on the entertainer's lot." The New York Times

"He puts everything together in a highly personal, intensely intimate fashion... incredibly moving and very funny- often both at the same time." The Wall Street Journal

Eric Yves Garcia performs ONE NIGHT STANDARDS, a selection of lesser-known tunes by the likes of Arlen, Whiting, Alec Wilder and Rod McKuen, as well as well-known standards from Coward, Porter, Rodgers, Styne and Trenet. Garcia's humorous performance tells the story of his life, from late nights performing in clubs, to love won and lost along the way.

Garcia was honoured to be the recipient of the 2013 Margaret Whiting Award presented at Jazz at Lincoln Centre, as well as the 2014 Bistro Award for Outstanding Singer / Instrumentalist. His solo show, One Night Standards, received 5* reviews in The New York Times and Wall Street Journal and toured the Northeast and Midwest. 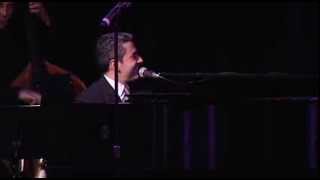