"Absolutely Brilliant! That really put me in a good mood" Simon Cowell

"The Jive Aces have to be one of the most entertaining and multi-talented acts around. Brilliant musicianship combined with a madcap sense of fun on stage" The Stage

"Jive Aces rocked us, literally. They raised the roof with their quirky suits and energetic moves." Huffington Post

The Jive Aces are renowned worldwide for their high-energy swinging music, spectacular stage show and being the first live band to reach the live final rounds of Britain's Got Talent.

The band's set list displays many influences - including Louis Prima, Duke Ellington, Bobby Darin and Louis Jordan - and features such classics as: "When You're Smiling"; "Mack The Knife"; "Sing, Sing, Sing" and their hit version of Morecambe & Wise's "Bring Me Sunshine", as well as songs from their fabulous new album, "Spread A Little Happiness".

They have appeared hundreds of TV and radio shows including a residency on BBC Radio London and TV shows such as The Alan Titchmarsh Show, Strictly Come Dancing and Children in Need. 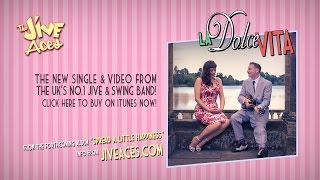