"As long as Steve Ross performs Cole Porter and Noel Coward songs, the reputations of these great songwriting wits can only continue to soar... Mr. Ross is a master of the light touch." The New York Times

Tues 5th to Sat 9th November
RIDIN' HIGH - STEVE ROSS SINGS COLE PORTER
"The very personification of the spirit of Cole Porter." The New Yorker.
This funny, spirited evening brings together Cole Porter's brilliant, sometimes racy, list songs like You're the Top, It's De-Lovely and They Couldn't Compare to You with some of the bittersweet, passionate ballads such as Night and Day, I Concentrate on You and In the Still of the Night. Interspersed are tales from the glamorous life Porter and his wife Linda lived in Europe in the Twenties and the ultimate style and bravery he displayed after a near fatal accident.

Tues 12th to Sat 16th November
THROUGH THE YEARS - A MUSICAL MEMOIR
Steve Ross has been visiting his second home, London, on and off for 30 years. In his second week at Crazy Coqs, Steve takes a look back on his performing life here with excerpts from all the shows he's put on by composers and music-makers like Fred Astaire, Cole Porter, Alan Jay Lerner, Irving Berlin and Stephen Sondheim. Included will be well-loved and familiar songs such as 99 Miles From LA, Time in a Bottle, Puttin' on the Ritz, If Ever I Would Leave You, Thanks for the Memory, These Foolish Things, Piano Pour Piaf and London Pride. He will also celebrate London with songs written in honour of this great city and written by American songwriters.

***
The New York Times called Steve Ross "the Crown Prince of New York Cabaret" and he hasn't lost his title yet, continuing to perform around the country and around the world, in every kind of venue, from cabaret clubs to theatres, to Carnegie Hall and to the Cabaret Convention. His voice is as bright and pleasing as his personality and his repartee is sprinkled with anecdotes and asides, delivered with sparkle. His piano playing is effortless and fluid and provides a powerful ally to his generally conversational singing style. As a pianist he is a cut above most of his cabaret colleagues.

This year, for the first time, his appearance at Crazy Coqs is part of the London Festival of Cabaret, taking place at multiple venues all over London. 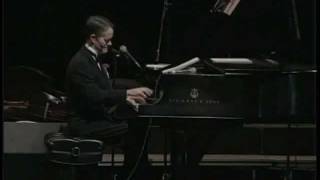