28TH MAY - A CRAZY MONDAY SHOW ON A TUESDAY!

'Nigel has confidence in delivering a familiar style of crusty cabaret and captures the eye with experience and affection for his craft... a proper entertainment show done well.' Bargain Theatreland

Nigel is a writer, lyricist, actor and performer. In his show he takes a quirky look at the worlds of the living and of the supernatural - using oodles of his own lyrics and monologues. His characters include an actor with a crisis of confidence, a love-sick Brummie, a fading star on an endless tour, a cougar and a vampire! His show has been described as 'filled with warmth and performed with cheeky panache.'

He has written a children's book published by Heinemann, then helped adapt it into a musical called Goblins Don't Scare Us, performed in London and Delaware, USA. He has also published worldoflegends.com, a fantasy novel. In recent years he has acted in various films, including The Drummond Will, a feature film, for which he received a best actor nomination.

Tom Wakeley is a gifted pianist, arranger, musical director and composer. He has many West End credits, including playing on Joseph and the Amazing Technicolour Dreamcoat, Kiss of the Spiderwoman, Phantom of the Opera and City of Angels. In recent years he was an assistant conductor on Chicago. He loves cabaret. 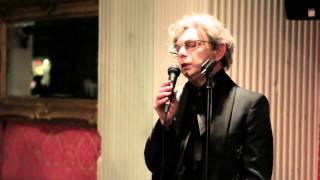