"Her rendition left me wanting to go backstage for the first time in my brief career as a theatre critic" Toby Young, The Spectator

In FRENCH KISS, Melinda Hughes and Jeremy Limb present their Edinburgh Festival show, starring a vacuous London socialite dragging her long-suffering and impoverished pianist from party to party. Married to a French banker, she drunkenly collects Modern Art, flirts with younger men, airs her opinions on the recession, recycling, French emigrés, the opera world and the literary scene in a collection of hilarious, risqué songs culminating in the perfect musical parody of the upper classes.

Melinda Hughes may be an opera singer but she's no stranger to cabaret. Her satirical group Kiss & Tell has performed at The Hay Literary Festival, Cadogan Hall and even as far afield as The Al Bustan Festival in Beirut. Jeremy Limb read music at Queen's College, Oxford and now works as a soloist, accompanist, sightreader, repetiteur (including English National Opera), as well as arranger and performer of all types of music including jazz/pop. He is also a writer and performer of comedy. 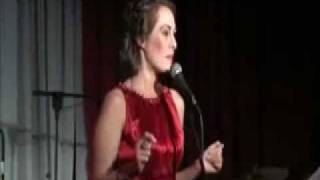