"Mark Nadler seems to have been shot out of a cannon! Mr. Nadler is a singer-dancer-pianist Punchinello who doesn¹t exactly have an act. He has many acts, and in the course of an evening he does them all. The best commedia dell¹arte in town!" The New York Observer

The award winning pianist/singer/comedian/dancer Mark Nadler, renowned for his dynamic piano playing which he often does at break neck speed, his powerful singing voice, blaze of energy and his extraordinary ability to tap dance whilst playing the piano, presents RUNNIN' WILD: SONGS & SCANDALS OF THE ROARING 20s.

For a performer who has earned the description of "having facial expressions like Mr. Bean, looking like Horowitz, moving about the stage like Spiderman, entertaining like Victor Borge, singing like Pavarotti and dancing like Fred Astaire", Nadler's shows at The Crazy Coqs promise to be evenings of great songs, comedy, dance and stories behind the scandals of the most scandalous decade in American history - highly entertaining and unmissable.

Mark, who originally hails from Iowa, was recently honoured with the 2013 Nightlife Award for Outstanding Cabaret Performer, as well as nominations for Cabaret Show of the Year and Best Celebrity Vocalist for the Broadway World Cabaret Awards. He has performed at Carnegie Hall with the New York Pops Orchestra and has been a soloist with the Baltimore Symphony, Indianapolis Symphony, Oregon Symphony, National Arts Centre Symphony in Ottawa and others. He has played New York City's Town Hall, Lincoln Centre and in almost every significant nightclub in New York City, Los Angeles, Chicago and San Francisco, notably at Sardi's (where a caricature of Mark hangs among the other famous faces). For his cabaret work, Mark has received a total of ten awards from the Manhattan Association of Cabarets and the New York Nightlife Awards. 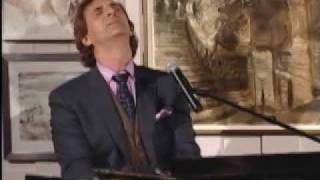