"…she puts the nightclub back into cabaret. Often mislabeled by her tumultuous fan base as a jazz singer, she can scat, improvise and break up her phrases in a conversational tone just like the best of them... I call her just plain miraculous." The New York Observer

" When Marilyn Maye is introduced as the "Marvelous" MM, it's not unusual. She's been referred to as mischievous, miraculous, stunning, amazing, spellbinding, spectacular, enthralling - every adjective the dictionary might offer as a descriptive. And they're all accurate!" The New York Times

"Marilyn Maye is pretty much every singer you ever wanted to hear: She has the rhythm and musicianship of a great jazz singer, the projection and personality of a heavyweight Broadway diva, and creates the intimate bond with her audiences that we demand from a cabaret artist." The Wall Street Journal

"The greatest white female singer in the world." Ella Fitzgerald

"A National Treasure." The Houston Chronicle

The award- winning Marilyn Maye makes her debut at Crazy Coqs with her show AN EVENING WITH MARILYN MAYE singing classics from The American Songbook alongside Musical Director and pianist Billy Stritch.

Maye appeared 76 times on The Tonight Show with Johnny Carson - the record for a singer, and the prestigious Smithsonian Institute chose her recording of Too Late Now for inclusion in its Best Performers of the Best Compositions of the 20th Century permanent collection, along with singing greats such as Billie Holiday, Frank Sinatra and Judy Garland.

Among her many symphony concert appearances around the United States, she has joined The New York Pops at Carnegie Hall for tributes to Stephen Sondheim and Frank Loesser. Her New York engagements include sold-out multiple-nights at The Metropolitan Room, New York's Town Hall, and five two-week runs at Feinstein's at The Loews Regency Hotel. 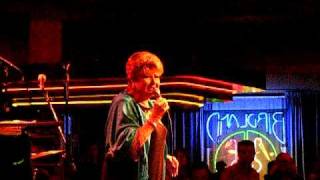