"Oh my God, it doesn't get much better than this... amazing, ridiculously talented young jazz group, fronted by a dazzling vocalist." Steven Berkoff

"London Red are a sensation - fabulous fun and real music - and very sexy too in the widest sense of the word - watch out: they will be big." Simon Woodroffe OBE - Founder of YO! and original BBC Dragon

With an average age of just 20, this talented jazz band has a string of prestigious gigs under their belts and red braces. Venues include Ronnie Scotts - London, The Spice of Life, The Madinat Jumeirah Hotel - Dubai, The Surrey Heritage & Food Festivals, Trinity Jazz Night. They can boast sell-out gigs here at Crazy Coqs, as well as Pizza Express, Dean Street and have become regulars at The Hideaway in Streatham. Private bookings include The Spectator party and charity nights for MS and The Neuro Foundation.

Their music reflects latin, soul and funk versions of jazz standards mixed with their own compositions.

On keys, Greg Evain specialises in boogie-woogie and blues. A graduate of Nantes Conservatoire, he is now pursuing a post-graduate diploma at Trinity Laban here in London and is much in demand as a performer with several groups including Winnet, Blue 7 and Trinity Jazz Ensemble.

On bass, Benjamin Crane also studies at Trinity Laban. His eclectic tastes in music cover the full spectrum from jazz to folk, rock 'n' soul and funk. He plays bass with the National Youth Jazz Orchestra, who will be appearing this month with Wynton Marsalis and the Lincoln Center Orchestra.

On drums, James Dancer studies jazz performance at Trinity Laban. He plays with Out of the Loop as well as London Red and, recently, he was delighted to be asked to play for Tony Hadley of Spandau Ballet.

On trumpet & vocals, Freddie Benedict, has sung solos at the Royal Festival Hall, Krakow Filharmonia and Glyndebourne. He has a choral scholarship to Kings College London, where he sings with the King's Big Band and All the King's Men acapella group. He is part-time vocal coach and holds the chair as lead male singer with the National Youth Jazz Orchestra.

Band leader & on sax, Alex Dugan has reached diploma level on soprano, tenor and baritone sax. His sax quartet became Pro Corda National Champions in 2012, the same year he became Trinity Musician of the Year. Now studying at the L.S.E., he plays with the University of London Big Band. 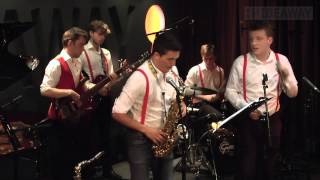