"She is a class act. An astonishingly bold and brilliant gem!" Daily Mail

The legendary French actress, dancer and singer Liliane Montevecchi makes her debut at The Crazy Coqs with her stunning show PARIS ON THE THAMES - the story of Montevecchi's life from her Follies Bergère ballet days to Hollywood and Broadway.

Her illustrious career began as a prima ballerina in Roland Petit's dance company, but Montevecchi is perhaps best known for her Tony Award and Drama Desk Award winning role in Tommy Tune's Nine, when she won the Best Featured Actress in a Musical. She then went on to earn a Tony nomination for Best Actress in a Musical for her role in Grand Hotel. Later she appeared in films with Elvis Presley, Marlon Brando, Fred Astaire and Matthew McConaughey. She starred in musicals Irma La Douce, Gigi and Hello Dolly and La Plume de Ma Tante.

Montevecchi has appeared in concert at Carnegie Hall and The Lincoln Center and toured internationally with her semi-autobiographical shows On the Boulevard and Back on the Boulevards.

Her very successful solo show, Hello, Darlings, ran for two nights in April, 2013 at the New York City nightclub 54 Below 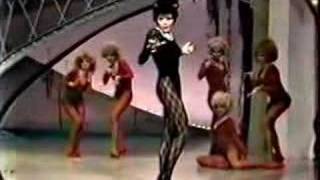