"A speculative exploration of [Mitchell and Cohen's] personal and artistic chemistry is only one aspect of Lauren Fox's remarkable cabaret show... Ms. Fox's rendition of Mr. Cohen's "Hallelujah" was the deepest and most dramatically revealing of any I've heard." The New York Times
"Lauren Fox is actually one of the best traditional-style cabaret performers currently emerging." The Wall Street Journal

In LOVE, LUST, FEAR AND FREEDOM, through stories and song, the highly praised, young New York cabaret performer Lauren Fox examines the creative genius and conflicted desires of two of America's most enduring and popular artists. Joni Mitchell and Leonard Cohen are widely known to be two of the best and most prolific songwriters of their generation. Less known is that they had a short-lived relationship early in their careers. Through their music, Fox explores their histories, triumphs and heartbreaks, delving into the meaning behind the lyrics to give us a better understanding of a painter and a poet who mesmerized the world through song.

Highlights of the show include Mitchell's River and Both Sides Now, and Cohen's Bird On A Wire and Hallelujah.

Lauren was born, raised and still lives in New York City. She has been featured in several films, including Pi, Noon Blue Apples, Revolution Summer, The Hammer and We Need To Talk About Kevin. She has performed at Jazz at Lincoln Center's Rose Theatre, Carnegie Hall, Town Hall, Subculture NYC, Joe's Pub, Monmouth University, and performing arts centres around the country. Lauren is the 2012 recipient of the MAC and Bistro Award for Debut Artist, as well as the 2013 recipient of a Nightlife Award for Outstanding Cabaret Performer.

This show is presented as part of THE LONDON FESTIVAL OF CABARET. 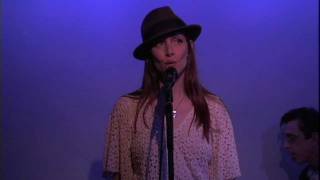