"Warm intimacy, pitch perfect, funny, poignant, mellow, sexy and spirited (with) a sophisticated sense of phrasing... Her voice warms like melting butter to infuse her love songs with emotion and passion. Few of today's singers elicit the sense of rapture as naturally and intimately as Karen Oberlin." Cabaret Scenes

Following her popular debut in 2012, Karen Oberlin returns to The Crazy Coqs with a new show, OVER THE RAINBOW: The Songs of Harold Arlen and Yip Harburg. Oberlin has performed the songs of Arlen and Harburg all over the US and in Paris, having a deep love and affinity for both of these songwriters.

The convergence of two of the greatest songwriters of all time was realised in 1939, with the release of the film The Wizard of Oz. The songs from the film, written by these titans of the Great American Songbook, would change the musical world forever, the best known among these evergreens being placed on many lists as "the greatest song of the twentieth century". Aside from Over the Rainbow and other songs from that film, they created numerous Broadway shows together and wrote many popular songs and Hollywood hits such as Last Night When We Were Young, If I Only Had A Heart/Brain, Happiness Is Just A Thing Called Joe, Down With Love and, of course, Groucho Marx's Lydia the Tattooed Lady, among many other masterpieces.

In her show, Oberlin explores some of these musical geniuses' songs before they had joined forces and what helped make the magic between them. Their songs burst with humour, beauty and intelligence, not to mention the songwriters' devotion to improving the human condition. Their body of work is quite unlike any before or since, and Oberlin brings their best moments to radiant life.

Oberlin, who appeared in an opera at the age of six and hasn't stopped singing since, performed in the hit off-Broadway show Our Sinatra over 100 times. She has many theatrical, film and television credits, including performing in the first staged version of the now-legendary Broadway show RENT and playing a recurring nurse on the American soap opera All My Children. Oberlin has headlined at all the New York premier cabaret and jazz rooms and has toured worldwide. She has been the recipient of Nightlife, MAC and Bistro Awards and she is a recording artist with three CD's and is currently busy with her fourth.

"Thrilling! Oberlin is as lovely to look at as she is to hear... Breathless when the song is as romantic as a country road, then forceful and full-speed-ahead when the mood turns onto a musical freeway, (her singing) rings true and funny and flawless." New York Observer 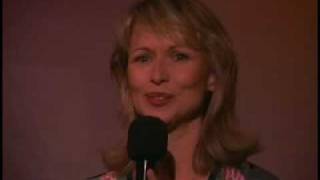