"Joanna Strand is a great emerging talent and her band is first class." Jazz FM

"Joanna Strand and Jacqui Tate are the perfect vocal duo. Jacqui is a natural comedienne and Joanna effortlessly elegant at all times. Their show is musically riveting and hugely entertaining." Cabaret News

Jazz vocalist and West End actress Joanna Strand holds numerous West End and touring credits including Emma in Jekyll and Hyde, Sharon Graham in Master Class, Madame Giry in Phantom of the Opera and lead woman in Jacques Brel is Alive and Well and Living in Paris.

On June 2, Strand will be joined by Jacqueline Tate [Avenue Q, South Pacific, Phantom of the Opera] with a brand new duo cabaret show, including original interpretations of Bernstein, Porter, Rainger, Rodgers, Gershwin and more. Their signature jazz duet arrangements range from the sublime to the very silly! With Jason Reeve on drums.

On June 3, acclaimed accordionist Romano Viazzani [Songs from a Hotel Bedroom, Piaf] returns to The Crazy Coqs to join Ms Strand for some thrilling original arrangements of Legrand, Arlen, Porter, Piazzola, Poulenc and more. With Jason Reeve on drums.

On June 4, Strand invites award winning bass -baritone Rodney Earl Clarke [Porgy and Bess, On the Town] to perform songs and duets by Gershwin, Porter, Cy Coleman, Rogers and Hammerstein and Bernstein. Strand and Clarke met as students at the Royal Academy of Music and tonight promises to be a musical extravaganza as they join forces again for the first time in 20 years. With John Bailey (piano), Nick Pini (double bass) and Jason Reeve on drums. 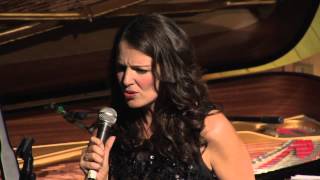