"The most important male cabaret performer since Michael Feinstein." The New York Times
"Sincerely sophisticated showmanship." Jazz Times
"Jeff performs with a joy that can only be called true style." Liza Minnelli
"Looking relaxed and sounding sensational, Harnar couldn't take a wrong step in a wonderful set of songs." *****NEXT Magazine

It is nearly five years since Jeff Harnar wooed the UK audience with his show Jeff Harnar Presents the American Songbook and now he debuts his new show DOES THIS SONG MAKE ME LOOK FAT? (Lighter Fare for a Winter Night) at The Crazy Coqs.

The show celebrates the wit of Cahn, Coward, Cole, Comden & Green, Kander & Ebb, Tom Lehrer and more, and includes songs such as "I'm Throwing a Ball Tonight", "My Personal Property", "Lonely Town", "Sail Away", "Mrs. Worthington", "The Elements", "The World Goes Round" and "Can Can". Between songs, Harnar delivers witty stories about his childhood, living in New York and of course about the songs themselves.

Harnar is the winner of the 2012 Noel Coward Foundation Cabaret Award and also holder of 3 MAC Awards and 4 BISTRO Awards. He has performed at Carnegie Hall in both the Cole Porter and Noel Coward Centennial Galas, recorded 4 solo CD's and can be seen as The Nightclub Singer in the 2013 feature film A Portrait of James Dean: Joshua Tree, 1951. 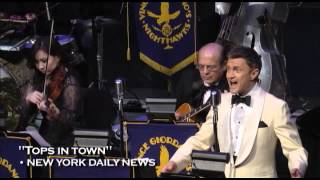