"Brassard can act, sing, dance, and communicate. His polish is accessible, his charm infectious, the show is entertaining and informative… Jean Brassard may have a lighter footprint than Montand, but his talent and showmanship hold their own in an inestimable tradition." Cabaret Scenes

Yves Montand was one of France's most original stars and a leading interpreter of French chansons. In THE KID FROM PARIS, co-written and aptly directed by David Krueger, Jean Brassard presents an eclectic selection from Montand's repertoire, spanning an international 50-year career on stage and film. Brassard's solo tribute deftly weaves together songs, theatre vignettes and a vivid narrative of the beloved French icon's life, loves, passions and politics.

Brassard, a French-speaking native of Quebec City, Canada, has been a New Yorker since 1982, and continues building his career on stage, television and film. A talented singer, graceful dancer, mime and natural raconteur, he has performed on numerous Manhattan stages with artists such as Steve Ross, Karen Kohler, K.T.Sullivan, Micheline van Hautem, Bob Cuccioli and Natascia Diaz. Jean was nominated for a MAC Award as Best Male Vocalist Debut. In 2012, he won an AGGIE Award as well as the New York Bistro Award for Outstanding Tribute, for The Kid from Paris. 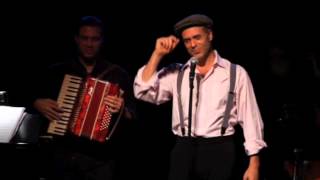