"Harold is having so much fun, he makes each show a mahvellous party." Playbill

Harold Sanditen returns for the launch of his new album, "Flyin' High", originally recorded live at Crazy Coqs. It's the first "Live At The Crazy Coqs" CD to be released. Harold delighted audiences in his original performance before touring with the show to packed houses from Los Angeles to Paris.

Harold is an avid traveller with many tales from the road. His CD is fun and light-hearted, with songs by The Beatles, Cy Coleman, Jimmy Van Heusen, Carole King, Irving Berlin, Jobim and many more, all related to his adventures travelling the globe. Expect rhythm, lots of humour and just enough pathos!

Tonight's show will include a selection of songs from the CD, along with some brand new songs and special guests including Dame Janet Suzman, Gary Williams, Champagne Charlie and more to be announced soon.

Harold is also the host of our hugely popular, weekly Open Mic Night, now in it's third year.

Harold will be joined on stage by Michael Roulston on piano, Tom Mansi on bass, and Jonathan "Kitch" Kitching on drums and percussion. 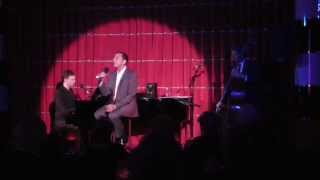