Gary Williams "One of the best voices Britain has ever produced." The Times

Harry The Piano "The best damn pianist in the civilised world." Jonathan Ross
"An uncanny ability." The Independent

2015 sees the 100th birthday of Ol' Blue Eyes himself. Widely acknowledged as one of the greatest voices of the 20th century, his legacy burns brighter than ever. What better way to celebrate than Sinatra Jukebox with Gary Williams and Harry the Piano - a show described by Time Out as "Old school virtuosity."

One Voice, One piano, One Hundred Songs... the rest is up to you...

Star of the West End's 'Rat Pack' Gary Williams will be led entirely by his audience, performing whatever the audience requests from 100 of Sinatra's best loved hits. Welcome to Sinatra Jukebox, a show full of surprises!
100 years, 100 songs.

Gary is joined by Harry the Piano who plays absolutely anything on piano ("Staggering virtuosity." The Sunday Times), has over three million hits on YouTube and is known for playing any tune in any style upon request.

Sharpen your pencils and catch Gary Williams and Harry the Piano, your very own walking, talking Sinatra Jukebox. Remember, if you don't like it, you've only got yourself to blame. 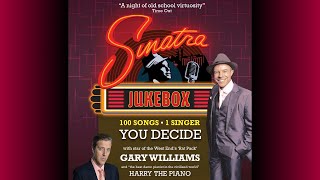