"Exhilarating… Ms. Fasano is a lyrically sensitive interpreter … Mr. Comstock is an ideal balance between swinging precision and ingenious musical wit. Meet the new fun couple on the block. Mr. Comstock and Ms. Fasano are turning the neighborhood into a hotbed of pleasure." New York Times
"Masterful… they take it to a whole other level … Ms. Fasano is a charismatic stylist who effectively channels the spirits of the great über-divas Lena Horne and Barbra Streisand." Wall Street Journal

Comstock and Fasano, whose chemistry has been described as having a little bit of the Astaire-Rogers blend of sex and class, have been honoured as vocalists, recording artists, and writers of their numerous performance pieces. Regular performers at New York's most prestigious clubs and concert halls, they have received an unprecedented three MAC Awards in one year including Vocal Duo of the Year, Outstanding Female Vocalist and Record of the Year. They are also multiple MAC, Bistro and New York Nightlife Award winners and have just been honoured with the 2013 MAC award for Major Duo. 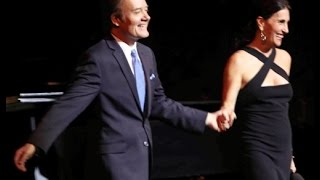