In THEY CALLED ME AL, Brandyn Shaw is Al Bowlly, and charts the life and musical career of the crooner widely regarded as Britain's first 'pop' singer. Shaw is recognised as one of the country's most accurate exponents of Bowlly's crooning style.

Billed as the 'Ambassador of Song', Bowlly made over one thousand recordings during his lifetime in his sincere and unique voice, ensuring that his is often considered 'the voice' of the 1930s. Together with Bowlly's regular pianist, Monia Liter, Shaw invites you to listen to the often tumultuous and ultimately tragic life of the inimitable crooner.

Brandyn is seen by many as the 'new voice' of the 1930s. Performing nationwide at top vintage events and venues, he pays particular tribute to the crooning star Al Bowlly. He recently appeared on BBC4's 'Len Goodman's Dance Band Days' as consultant historian and re-enacted two of Al's greatest hits, The Very Thought of You and Melancholy Baby. He has also had the great honour and pleasure to perform with his band, 'The Rhythm Makers', as Al Bowlly at the unveiling of Al's long awaited English Heritage Blue Plaque, organised by 'Memory Lane Magazine', headed by Bowlly's official biographer, Ray Pallett.

This show is presented as part of THE LONDON FESTIVAL OF CABARET.
Tweet 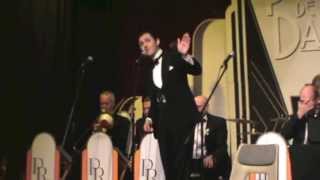