"Anna Bergman thrills you with spectacular high notes and the sheer aural sensation of her voice. A superior soprano exploring the lower part of her range… proves that [she] can be just as sultry as a blues singer." The Wall Street Journal

"A vocal citizen of the world who has triumphed in everything from Broadway tunes to opera arias and the sultry innuendoes of a cabaret chanteuse." Washington Post

"An eclectic collection of the American and European songbook, covering decades, styles and languages galore… This stylish soprano is all woman and grace… A musically versatile and stylishly executed evening." The Stage

Internationally acclaimed singer and actress Anna Bergman returns to The Crazy Coqs with pianist Nathan Martin to present her new show YOU'RE ALL THE WORLD TO ME: A WORLD TOUT R IN LOVE SONGS. Tapping into an international songbook, Anna sings in multiple languages in a variety of styles, from popular song to opera, including songs by Cole Porter, Jerome Kern, Rodgers & Hart, Lerner & Loewe, Billy Joel and Michel Legrand to name a few.

Raised abroad as the daughter of an American diplomat, Anna has been soloist for HM Queen Elizabeth¹s birthday, at The White House, Lincoln Center, Carnegie Hall, Kennedy Center, with symphony orchestras, international music festivals and TV Specials including her solo concert for PBS. Her stage roles range from Kate (Kiss Me Kate) and Guenevere (Camelot) to Masha (Three Sisters) and Valencienne (The Merry Widow). 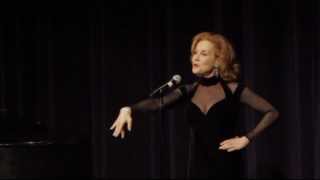