"A sensational talent in the tradition of Stéphane Grappelli and Joe Venuti, Mr. Weinstein is an inventive melodic improviser." New York Times
"If I didn't hear and see him myself, I wouldn't believe it. He's out of sight! He's a genius!" Jon Hendricks, jazz legend

Called "The Groucho of the violin" (Tony Bennett) and "a perfect musician" (jazz guitar legend, Bucky Pizzarelli), New York City Jazz violinist Aaron Weinstein has earned a reputation as one of the finest jazz musicians and entertainers of his generation.

For his London début at The Crazy Coqs, Weinstein will swing the Great American Songbook, while presenting his unique brand of humour for which he's been dubbed "a disciple of Woody Allen" (New York Times) and "the 21st century Jack Benny" (Huffington Post).

Aaron will be accompanied by David Newton on piano. 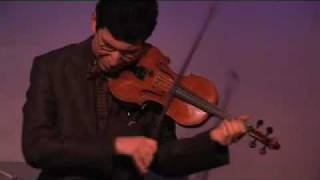