"Magnificent." Robert Elms, BBC Radio London
"The greatest singer I have heard in the last 30 years, a star!" Buddy Greco

Described by Time Out as "a singer not lacking in testosterone", she explores the lives and songs of the Blues Mother, Etta James and the Soul Sister, Nina Simone. Expect all the biggest hits including You Can Leave Your Hat On, My Baby Just Cares For Me, I'd Rather Go Blind, Feeling Good and Prince's Purple Rain.

Gill Manly is a considered a member of the British Jazz Royal family, a veteran of the UK jazz world. Her career began when she was discovered by international playboy and club owner Victor Lownes, who installed her immediately as his resident singer for 6 years continuously. With three critically acclaimed albums, Gill is known for her passionate and highly moving interpretations, often described as "flying vocally without a net"!

The genius that is Simon Wallace joins Gill on the piano.

Gill's recent sell-out performance s of her previous show, AT LAST! left her audience ecstatic:
"Gill has heart, she has soul and she has the best voice you will hear in your lifetime."
"To experience a performance by Gill is a true privilege that you will never forget... she will have you on your feet cheering for more, more, more."
"See her, hear her, love her."
"Completely knocked out by Gill Manly's breathtaking performance! Gravity-defying vocal skill, rhythmic genius, mesmerising stage presence and personality galore!" 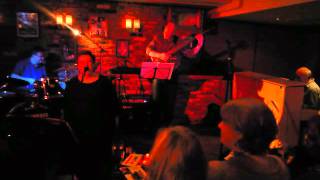